WCP Solar was contracted to design and construct a roof mounted solar system on a building hosting an Engineering Firm, located in Willowbrook, Illinois. This grid connected system ties directly into the Commonwealth Edison Utility’s (ComEd) power grid and generates enough electricity to provide power to more than 57% of the facility electrical needs. 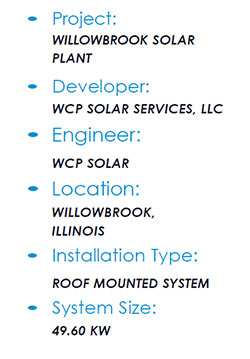 The project was sized at 49.60-kWp1, using 620 CdTe Thin Film frameless photovoltaic panels rated at 80-W mounted on a 10 degree tilt on a flat rooftop. The system also employs 2 string inverters, each rated at 24-kW, to convert the DC energy produced by the solar plant into AC energy.

In addition to providing significant energy savings, the solar system will produce approximately 68 Solar Renewable Energy Credits (SREC's) and also qualify for significant federal tax credit. It is estimated that based on the incentives received by the company and the energy savings being experienced, the system will be paid off within 4 years from the date of commissioning.

The project was commissioned within 2 months from issuance of the construction permit while the WCP Solar construction management team oversaw all phases of the construction process, including the day to day operations, weekly subcontractor, and Owner meetings, site monitoring, quality assurance and control, and scheduling.

Completed on June 25th 2015, this project was another example of strong design management and project leadership by the WCP Solar team.

1 Estimated reduction of over 6,000 Tons of CO2 - Equivalent to Planting over 38,450 trees or Displacing CO2 emissions from the annual electric use of over 185 homes