WCP Solar was contracted to design and construct a carport & rooftop mounted solar system on a car parking lot and building hosting an Engineering Firm, located in Springfield, Illinois. This grid connected system ties directly into the City Water Light and Power (CWLP)utility’s power grid and generates enough electricity to provide power to more than 89% of the facility electrical needs. 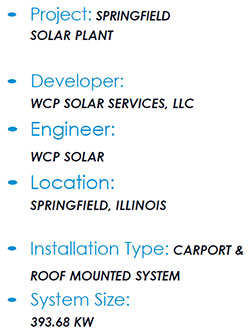 In addition to providing significant energy savings, the solar system will produce approximately 492 Solar Renewable Energy Credits (SREC's) annually and also qualifies for significant federal tax credit, local, and State rebates. It is estimated, that based on the incentives received, favorable inovative financing provided by Developer, and the energy savings being experienced, the system will be cash positive from day one.

The WCP Solar construction management team will oversee all phases of the construction process, including the day to day operations, weekly subcontractor, and Owner meetings, site monitoring, quality assurance and control, and scheduling.

The Solar System will be the largest carport system in the USA employing the CdTe, Thin Film, all glass, framelss Photovoltaic panels. Estimated completion date May, 2017.

1 Estimated production of over 10,000 Tons of CO2 - Equivalent to Planting over 218,000 trees or Displacing CO2 emissions from the annual electric use of over 1055 homes