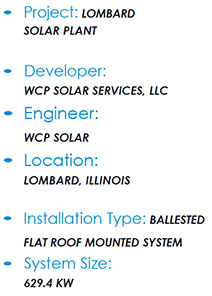 The project is sized at 629.4-kWp1, using 2,030 Photovoltaic panels rated at 310-W for the rooftop Solar system. The System employs 13 Solaredge string inverters and 984 P700 power optimizers appropriately sized to convert the DC energy produced by the solar plant into AC energy.

In addition to providing significant energy savings, the solar system will produce significant revenue from selling approximately 793 Solar Renewable Energy Credits (SREC's) annually to the Illinois Power Agency, write off a 30% federal tax credit and through federal tax Modified Accelerated Cost Recovery System (MACRS) you can depreciate solar system in 5 years. It is estimated, that based on the incentives received, favorable inovative financing provided by Developer, and the energy savings being experienced, the system will be cash positive from day one with a very attactive return on investement (ROI) of less than 3 years.

The WCP Solar construction management team oversaw all phases of the construction process, including the day to day operations, weekly subcontractor, and Owner meetings, site monitoring, quality assurance and control, and scheduling.

1 Estimated production of over 12,700 Tons of CO2 - Equivalent to Planting over 334,000 trees or Displacing CO2 emissions from the annual electric use of over 1582 homes