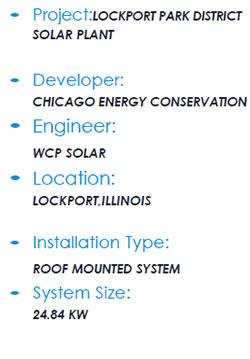 The project was sized at 24.84-kWp1, using 108 SW-230 Solarworld photovoltaic panels rated at 230-W mounted on a 10 degree tilt on a slanted metal roof. The system also employs 2 Fronius string inverters rated at 10.0-kW, to convert the DC energy produced by the solar plant into AC energy.

WCP Solar construction management team oversaw all phases of the construction process, including the day to day operations, site monitoring, quality assurance and control, and scheduling. Installation was completed in 5 days.

Completed on May 30th 2014, this project was another example of strong project management and leadership by the WCP Solar team.